Vegetables are a must on a diet. I suggest carrot cake, zucchini bread and pumpkin pie.

Some nights, the aroma of baking brings me back to a certain consciousness. And it’s how I relax. Some folks soak in a lavender bath, others take a walk in nature or lose themselves in a book. I like to bake.

Today is National Pumpkin Cheesecake Day, and I’ve been experimenting a lot with pumpkins and pumpkin recipes. It only seems natural that pumpkins and cheesecake would form a perfect union, and I think I found the ultimate pumpkin cheesecake with this recipe. In fact, I think I’ve found the perfect Thanksgiving Day dessert.

There is great artistry in the pumpkin pie. It’s found in the silky, ginger texture of the pumpkin filling and the perfect symmetry of the crust that encircles it like a golden halo. Here we have combined all of the warmth of the traditional pumpkin pie with the best flavors of fall for this delectable dessert. Loaded with pumpkin puree and the spices of cinnamon and ginger tucked away into a crispy and savory cinnamon cookie crust, then topped with fresh whipped cream and a salted caramel sauce . . . . well, it is simply a delicious match made in heaven that will leave you pining for more.

Let’s take it step-by-step to create this ultimate pumpkin cheesecake, starting with the crust.

How to Make a Pumpkin Cheesecake Crust

It all starts with a crust. Most cheesecakes sit atop various forms of a graham cracker crust — a simple mixture of graham crackers, sugar and butter — formed in a springform pan. Others show off something unexpected like nuts or cookies. In fact, one of my friends uses Lorna Doone shortbread cookies for her New York cheesecake crust.

To enhance the flavors of fall, I choose these Lotus Biscoff cookies for their brown sugar and cinnamon flavor. Similar to making a graham cracker crust, I started by putting the cookies into the food processor to crush into fine crumbles. Place in a bowl to mix with melted butter, ginger, cinnamon and sugar. Pour into a 9-inch or 10-inch springform pan and press gently throughout the bottom and partially up the sides of the pan. Using the back of a spoon or fork helps press the crumbs into place and keep them where you want them.

A water bath sounds like something complicated or extravagant, though trust me, it will make all the difference in the finished cheesecake product. In its essence, it’s simply a pan of hot water placed in the oven while baking. This simple method adds moisture to the oven and especially helps to prevent cheesecakes (or custards) from cracking or becoming rubbery. It also provides a more even and slower heat source than the direct heat of the oven, which also helps prevent the cheesecake from sinking back down as it cools.

To prepare a water bath, take folded strips of heavy aluminum foil and wrap the edges of your springform pan to insulate the cheesecake even further. Once your pan is full of all the creamy goodness, set it inside a large roasting pan filled 1-2 inches up the pan with water. Place in the oven at the desired baking temperature.

Here are some additional helpful hints for making the “ultimate” cheesecake of any flavor, and some specific pointers for the pumpkin cheesecake.

If you follow all of the steps and helpful hints, you will be crowned cheesecake queen by your family. The pumpkin flavor, the creamy cheesecake, the snap of the cinnamon cookie crust, the dollops of freshly whipped cream, and the salted caramel drizzles all combine to create the homey taste of fall on your fork. It’s the perfect dessert for Thanksgiving, the holidays or any fall day. 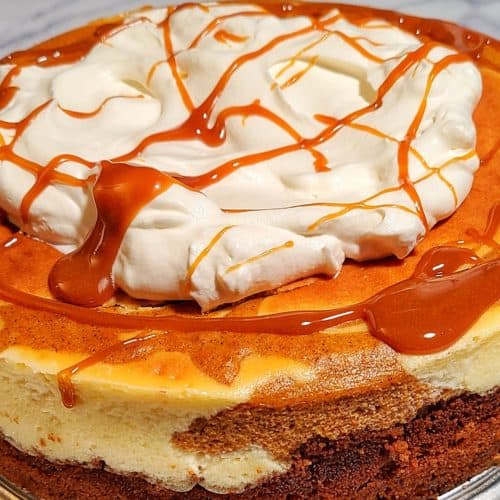 Hi! I'm Luanna
I love to Eat, Drink, Work and Play. Welcome to my world!